SAE Institute presented its 2nd annual Synthposium on Monday the 14th of November, 2016 at its Melbourne campus in South Melbourne. Following 2015’s successful evening event, the Synthposium was expanded for 2016 into an all-day academic conference and evening session of workshops, vintage gear demos and jamming.

In the evening the Synthposium culminated in a demonstration of vintage gear and an open jam session with hand-on knob-twiddling action. This included the presence of rare 1970s and early 80s synthesizers and other electronic music equipment especially loaned to SAE Institute by collectors and electronic music artists throughout Melbourne for this night only. Equipment for the event included the early 1970s synths the Arp Odyssey and Roland SH1000 along with the late-70s synth the Roland Jupiter-4, the early 80s Roland MC202 and the 1980s Oberheim DX drum machine.

Keynote Address by Robin Fox: My complicated (and often Freudian) relationship to machines and the synth manual as utopian manifesto from Transaudio to the Triadex muse.

James Gardner: Peddling the Putney: Early Adopters and the Marketing of EMS synthesisers

Keynote Address by Les Craythorn: MIDI in the 80s: a technical master stroke or the regimentation of the analogue creative experience?

Tim Dalton: Even Better Than The Real Thing: Synthesizers and the creation of hyper-reality and simulacrum in popular music

Nick Wilson: The synth solo: Rupture in the fabric of recorded music

David Prescott-Steed: Gassing for a Synth: A Self-Reflexive Approach to the Psycho-Social Contexts of Gear Acquisition Syndrome 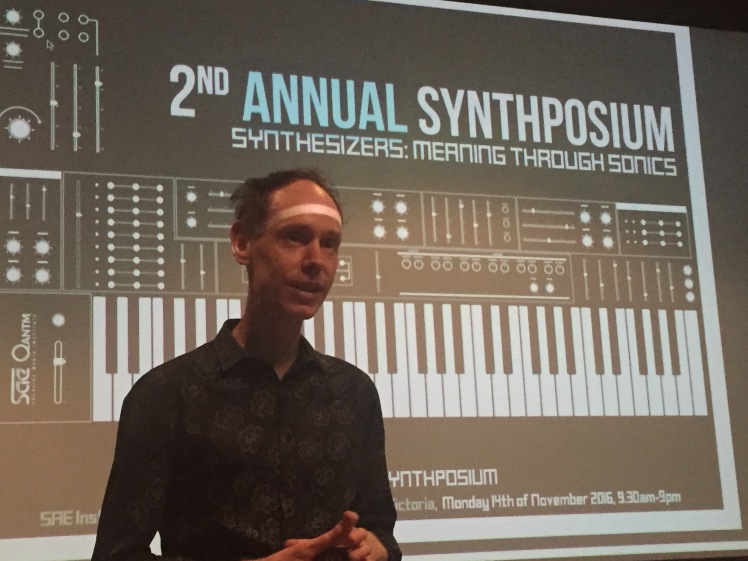 David Haberfeld warms up his bank of 303s: